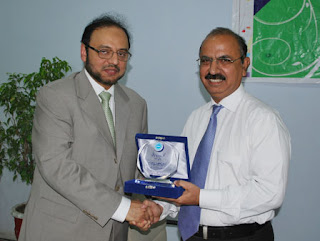 The University of Management and Technology (UMT), Lahore, organized a special ceremony to promote and appreciate Dr Shahid Siddiqui’s book “Aadhay Adhooray Khwaab”.
The first edition of this thought provoking novel has already been sold out while the second edition is already on the market. Hamid Khan, former President Supreme Court Bar Association, and Raja Anwar, Chairman of the Chief Minister’s Taskforce for Elementary Education, were the chief guests of the ceremony. 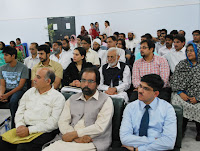 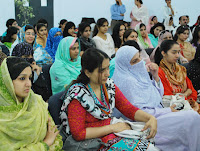 Addressing on the occasion, Dr Hasan Sohaib Murad, Rector UMT, said that the book was a valuable addition to the literary world. He observed that history testifies to the fact that the decline and downfall of nations is largely attributable to their weakness is the world of knowledge and literature. He said that the chief character of the novel was that of an ideal teacher, who unfortunately, was a rare species in today’s world. However, the writer deserves credit for highlighting the role of the teacher at a time when society desperately needs dedicated teachers who may be mentors of future generations.
Reflecting on the merits of the novel, Hamid Khan said that the sacrifices made by the characters depicted in the book for the restoration of the judiciary serve as guidelines for all of us. Raja Anwar said that military dictatorships have always harmed the country and resistance against such dictatorships serve as milestones in our national history. He added that Dr Shahid Siddiqui should be congratulated for doing justice to all characters in the novel and for conveying a message of working towards a higher purpose in life. At the end, Dr Shahid Siddiqui thanked Dr Hasan Sohaib Murad, faculty members and students for their contributions in organizing the ceremony.
at 10:10 AM