Language, Gender, and Power
The Politics of Representation and Hegemony in South Asia 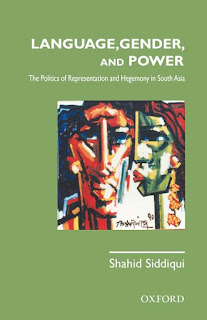 The book focuses on the role of language as a powerful tool in representing and structuring the world. It explores how language can help construct stereotypes, identities, and human relationships. By constructing stereotypes language also manifests and perpetuates gender differences. The author examines how gender is in fact made up on a continuous basis in different linguistic and artistic expressions, e.g., sayings and proverbs, jokes, songs, films, TV plays, newspapers, theatre, and slogans behind vehicles, and reveals how these apparently playful activities strengthen gender stereotypes unnoticed. The book highlights the politics of representation and hegemony with regard to women with special reference to language. The readers are encouraged to realize that on the one hand language is a tool of control and hegemony while on the other hand it can be used to mount resistance against hegemony by reversing the discourse. In this insightful, original and comprehensive book, Shahid Siddiqui draws on the full range of social sciences disciplines to analyse the complex intersections of language, gender and power in South Asian contexts. This represents an enormous and long-overdue contribution to the international literature on this topic. As readers, we gain a much deeper understanding than was previously the case of the ways in which language provides a lens to bring into focus the influence of societal power relations on the performance of gender. – Jim Cummins Professor, OISE/University of Toronto, Canada Shahid Siddiqui's book gives a lucid account of interrelationships between language, gender and power with a focus on South Asia. The book is of particular value because treatments of language and gender in this region have hitherto tended to lack a critical focus on questions of power. – Norman Fairclough Emeritus Professor, Lancaster University, U.K. This book is based on Dr. Shahid Siddiqui’s scholarly work spanning about ten years of study and field work. It is on a subject which has been crying out for scholarly attention for a long time —the relationship between language, gender and power. The author explores this nexus through conventional and unconventional sources including fairy tales, songs and nursery rhymes. This is the first time a Pakistani scholar has applied such prodigious learning to the Pakistani situation with such attention to accessibility, originality and humour. – Tariq Rahman HEC Distinguished National Professor, Emeritus Professor, Quaid-i-Azam University, Pakistan

Shahid Siddiqui obtained his Ph.D. in Language Education from the University of Toronto, Canada and M.Ed. TESOL from the University of Manchester, U.K. He has been involved with the educational system of Pakistan as a teacher, teacher educator, and researcher. He has worked in some prestigious universities such as the Aga Khan University (AKU), GIK Institute of Engineering Sciences and Technology, and Lahore University of Management Sciences (LUMS). Presently he is Professor and Head of the Department of Social Sciences at the Lahore School of Economics (LSE). His areas of interest include socio-cultural aspects of language, gender, educational change, and critical pedagogy. His published books include, Rethinking Education in Pakistan: Perceptions, Practices, and Possibilities(2007), Adhe Adhoore Khawab (an Urdu novel), and forthcoming Education, Development, and Freedom.
at 7:39 PM