Review by
Kausar Bilal
The novel, Adhey Adhoorey Khawab, by Dr. Shahid Siddiqui, is very captivating because of its beautiful expression. It is unique in its topic and style, where life is integrated between love, education, sociology, politics and human welfare. The language used is very simple but very heart touching because of its literary touch. Its real life expression keeps the reader occupied with the novel till the end. The story is very close to real life experience, and the novelist is successful in creating the scenes that depict reality, where, sometimes, the reader finds himself/herself recalling his/her student life. 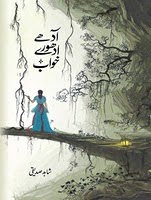 The novel is about an extraordinary college teacher, Professor Saharan Roy. He was extremely popular among his pupils as a beloved teacher and mentor because of his unique teaching style and philosophy of life. He was a passionate and dedicated teacher who not only had command over his subject matter very, but also knew how to teach it affectively. He used to relate the subject content to the real life experiences and examples. His special technique was to reach out to the minds and souls of his students, and, motivate them to learn, think and explore independently about what they were studying. Moreover, he used to add his loving, helping, encouraging and supporting attitude towards his students as part of his teaching, which resulted in building the self esteem and self confidence among his pupils. His interactive teaching style helped the students to think and understand the subject knowledge deeply, while he used to hold back his own scholarly opinions unless and until students had expressed their views. Another expression of his affection and encouragement towards his students was his gifts that he gave to his students as rewards for their good performances.
Professor Saharan Roy was a philosopher, too, who believed in using education creatively for human welfare as a tool for social and political reforms. Thus, in fact, as a teacher, and, social and political activist, he tried to give his students the courage to have dreams and a life for a cause.
At a point, he was attracted to a student, Imtisal, who came from a village for studies. In fact, we see two similar people, who are soul mates to each other, attracting to each other and love happens between them, but unfortunately, they could not recognize it immediately. In truth, they enjoyed each others company because they intuitively used to share the same dreams. Professor Roy encouraged and motivated Imtisal to make the dream come true by teaching at her village school. Then, Mr. Saharan Roy was arrested and tortured by the government during his participation in a Lawyers’ movement. Finally, the death news of Professor Roy had broken the hearts of all his students, including Imtisal. However, she was proud of him and went to materialize the dream of teaching at her village school despite all the better opportunities she could get.  Professor Saharan Roy was, no doubt, an unforgettable teacher who influenced the lives of his students for better and inspired them to fulfill their dreams of social and national reforms.
at 9:13 AM