The American prison systems of the late 18th and 19th centuries utilised the notion of the Panopticon - Jeremy Bentham's design that allowed all prisoners to see each other (pan, all; optic, see/observe) and therefore reduce the duty and necessity of prison guards. (We could all go off on a Marxist tangent here about the capitalist monetary system of breaking down skills into a series of jobs to keep the working classes in place but make the rich richer, but we'll have to stay out of it for now. Cans, worms.) The original panopticon got the prisoners to work menial jobs whilst all in each other's sight lines, therefore turning the watched and the watchers into one.
Foucault argues in Discipline and Punish that the psychological effects of this can be transposed onto society: modern disciplinary systems such as schools, armies, factories and hospitals create an observed, normalised society - he who misbehaves is seen doing so, and in turn he who sees the misbehaviour knows that if he can see it happening, someone can see him.
Were Foucault alive today, I'm pretty sure he'd rather like Facebook. Not only could he cruise the profiles of young men in his area (Facebook enables you to see the full profiles of anyone in the same "network" - eg city, town, university - as you, but only to see thumbnails of those outside of it), but every time he logged on he'd also be greeted with a page telling him everything that is going on in his surroundings.
Who's made friends with who? Who's updated their profile photo? Who's changed their favourite film or band? Who's joined which groups? Who's attending which event? Who's now single, or in a relationship? These profiles are, of course, partly lies - we are trying to construct our personalities, to represent, to come across as fully-formed people with quirks and characteristics when in fact we're all in a state of flux and self-creation.
It's only a matter of time
The panopticon of Facebook has enabled me to discover this: one of my friends is "not a feminist but..." (one of my favourite phrases ever, in fact I'd love Julie Birchill's fake TV documentary of the same name - in which a group of modern women are locked in a Big Brother style environment and have different privileges, such as to work, choose a spouse and press charges for rape - removed one by one over ten weeks); that another is a Future Conservative UK member; that two people who hated each other at school are now friends (did they grow up, or do they just want to have more friends on Facebook?).
And what is it saying about me? Is someone about to point out that, really, I don't love The Purple Rose of Cairo as much as my profile pretends, but I just couldn't think of a better "sad" Woody Allen film, to make me appear a more rounded person? Is Facebook trying to normalise me into telling the truth, or getting us all to judge each other as we reshape our meagre young lives? Perhaps it wants all of us to influence and argue each other, and delete people from our friends list for stepping out of line and joining the Future Conservatives UK group. I don't know. (I would quite like to talk to Foucault about this. Sadly he is dead. But there is a Facebook group called What the Foucault? that works for now.) 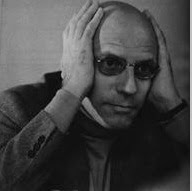 Foucault - oh, it's hard.
posted by swithun
Source: http://criticaltheoryforum.blogspot.com/
at 7:50 AM