The Real Cost of the Gojal Disaster 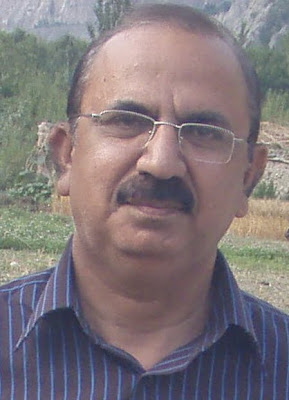 Two and a half months have passed – tiring, trying, and torturous months. 25,000 people are still stranded in Gojal (Upper Hunza), the biggest and beautiful tehsil of Gilgit-Baltistan, which was cut off by a landslide at Ata Abad on January 4. The flow of River Hunza has since been blocked by huge debris spread over three kilometres and an artificial lake has formed, rising and expanding every day. So far the length of the lake has gone up to 13 kilometres. When will this ordeal come to an end? When will life return to normal? When will the shackles of fear, uncertainty, and anxiety break? There is no clear answer to any of these questions. There are, however, false promises and hopes all over the place. The stranded inhabitants of Gojal realise it, but they are still waiting for some miracle.
The landslide has not only isolated Gojal from the rest of the country, but, with the passage of time, has led to some disturbing developments in terms of formation of an artificial lake whose rising water is posing a constant threat to low-lying areas. Water is entering the lake at the rate of 825 cubic feet per second and is rising at the rate of 1.6 feet every day. The current water level is 221 feet. The biggest potential danger is that the lake might burst.
According to an estimate, in case of an outburst, fifteen large and small bridges between Ata Abad and Gilgit are likely to be submerged and there is a danger that the flood may make its way to the Tarbela Dam.

It is important for analysts to examine the economic cost of the Gojal disaster at a local and national level. The major outcome of the disaster was the damaging of the Karakoram Highway and the collapse of the Shishkat-Gulmit Bridge, which disconnected Gojal with the rest of the country and cut off the only land route between China and Pakistan. A huge volume of trade between the two countries has come to a halt, which has had a negative impact on the country’s economy. The collapse of the expensive bridge between Shishkat and Gulmit, and destruction of three kilometers of the Karakoram Highway is a huge blow to the national exchequer. The loss of fruit orchards, cultivated lands, houses, properties, cattle, loss of businesses as a result of lack of communication have started hammering the local economy.

The Gojal disaster has tremendous life and health costs. Around nineteen people died on the day of the landslide at Ata Abad. And now the time for melting of glaciers is round the corner. This simply means more water in Hunza River, more pressure on the artificial lake, acceleration of water build up and enhanced probability of the lake’s outburst. Are our decision makers aware of this potential threat? Are they cognisant of the aftermaths of the potential outburst? Do they feel the urgency of the matter? The debris removal process is taking place but with a speed which is not satisfactory. 25,000 stranded people are praying for a miracle. Miracles, as Saint Augustine would suggest, are not contrary to nature, but only contrary to what we know about nature.

The writer is Director of Centre for Humanities and Social Sciences at Lahore School of Economics and author of Rethinking Education in Pakistan. Email:shahidksiddiqui@yahoo.com, Blog: shahidksiddiqui.blogspot.com
at 7:33 PM